Enabling companies across a broad range of industries to drive efficient operations through the use of market-leading, integrated software.

Eleco plc (AIM: ELCO) is a specialist international provider of world-class software and related services, supporting the built environment through its operations in the UK, Sweden, Germany, Netherlands and the USA.

The Group’s software solutions are used throughout the building lifecycle from early planning and design stages through to construction, interior fit out, asset management and facilities management to support project management, estimation, visualisation, Building Information Modelling (BIM) and property management.

We create stakeholder value by investing in the research and development of our software solutions which are sold directly in our core markets of the UK, Sweden, Germany, Netherlands and USA and indirectly through our international reseller partner channel. 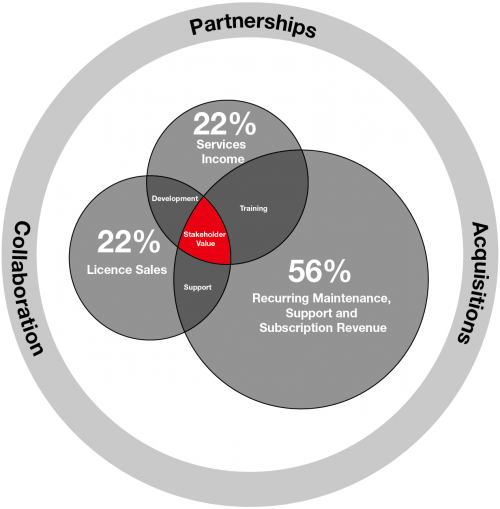 Eleco’s vision is to be the go to software provider across the full lifecycle of the built environment.

The company was renamed as the ‘Engineering and Lighting Equipment Company’ (ELECO).

Eleco incorporated on the 11 July.

Eleco undertakes its first acquisition in Bell & Webster Industries Ltd, which establishes Eleco as a supplier of structural systems.

Eleco Technology is formed to focus on R&D for Eleco Group and the development of specialised construction software.

Eleco establishes a permanent presence in Germany following the acquisition of ActiveOnline in 8th September.

Eleco enters the software market with the acquisitions of ESIGN Software GmbH (Germany) and the Consultec AB (Sweden).

Eleco expands portfolio in Germany with the acquisition of Eleco Software GmbH.

ELECO changes name to Elecosoft as decided at the 75th Annual General Meeting. The change reflects new software portfolio, providing a clean and clear message across all companies working for Elecosoft.

The company celebrates its 80th year of incorporation and listing on the London Stock Exchange.

Staff drive Eleco. We respect and value our people, encourage their development, and reward their performance.

The customer is at the centre of everything we do. Close, long-lasting relationships make a difference to our software, training, support and consultancy services, ultimately powering customer success.

We focus on delivering benefits; our customers trust the company and our technology to add value.

Our software has the scalability to grow with companies, despite changing priorities and evolving business landscapes. There is flexibility in our licensing models and customer support, including online and classroom options for customer training.

Customer demand drives us to continuously develop new software features and services. It is important for us to stay at the cutting edge of the market, outpacing competitors with new functionality that enables customers.

Get in touch with our investor relations team